To compound the difficulties, the use of Source Control Management (SCM) is often bypassed to expedite deployments. This type of deployment architecture is also not well suited for small, repetitive test iterations.

Nevertheless webMethods has a dependency on external tools to orchestrate all the above capabilities to implement CI and the broader CD (Continuous Delivery) process.

FlexDeploy helps automate your webMethods Integration Server development needs with simple configurations. No scripting needed. It is one tool that helps end to end.

FlexDeploy has concept of Workflow to allow for visually creating build or deployment steps. Here is an example of webMethods IntegrationServer Package build workflow which includes preliminary step of check out the source code from the SCM, then build the package as a ZIP file, and place them into an internal artifacts repository ready for deployment across environments.

You can build all your webMethods IntegrationServer packages with FlexDeploy with one click. FlexDeploy supports build automation with the help of webMethods Asset Build Environment script to generate build out of source code. As you see in the below screen, just click on the Build button and select the environment where the build will run and click Submit Request.

You can view the complete execution details and logs by clicking on the execution id. Execution details will display the details including who initiated the request, when, and what are the steps executed during the build as shown below.

Developers can submit a request for deployment manually with one click or schedule the deployment to execute without manual intervention.  There is no manual activity either to create project Automator xml with input values or to create projects in webMethods Deployer anymore!
To start a deployment process, provide inputs for target environment properties as shown in the below screen. These values are referred by webMethods Deployer while deploying the assets into the respective target server by establishing the remote connections.

To request for a deployment, just click on the Deploy button and select the environment to which you would like to deploy and click Submit Request as shown below.

This operation initiates the following sub-processes that get executed internally.

The selected version of Build(webMethods package ZIP file) is retrieved from internal artifacts repository and will be used to deploy into target webMethods runtime.
You can view the Execution details by clicking on the Execution ID as we saw in Build execution. 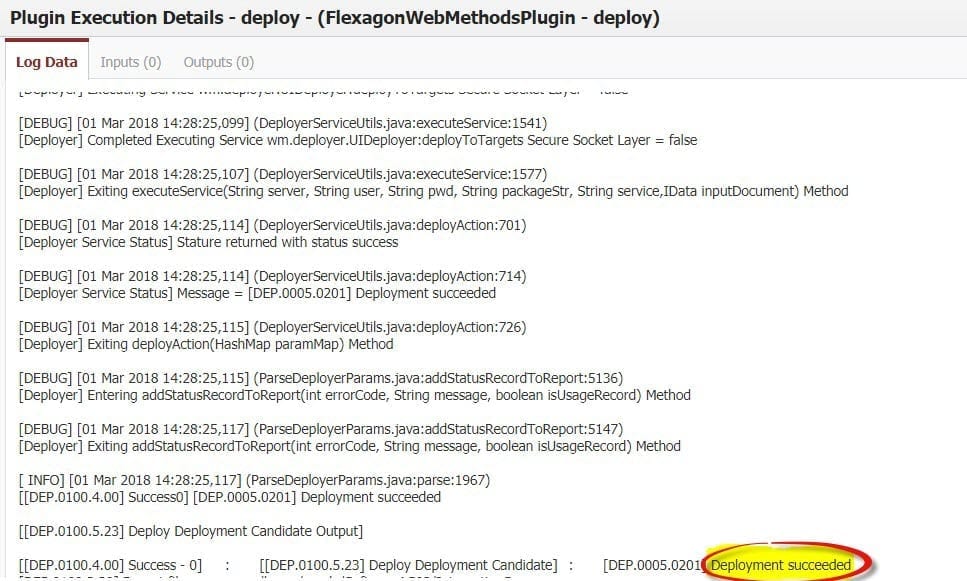 Conclusion
You just saw how FlexDeploy supports webMethods to implement Continuous Integration and Deployment with a few simple configurations and no scripting required! Have questions about how this can become a reality for you? Feel free to leave a message in the comments or request a demo.
Share this: