For a long time software development processes have been using packages. A package, for all intents and purposes, is a container file. Much like a zip file, they contain other files such as binaries, source code, scripts, and also a manifest that tells users what this project package means. Some common usages of packages are to make it easier to reuse and share code or to deploy code dependencies to different projects. Often, having a formal system with packages can help expose bugs sooner, making it easier to deliver trustworthy software. FlexDeploy packages, along with other built-in continuous integration and delivery functionality, will allow for a significant increase in productivity for developers and release managers.

In this blog, we will explore the significance of partial projects, how we can utilize project packages, and also integrating change management into the build and deployment of those packages.

In general, projects hold the artifacts that can be built and deployed as a unit. Artifacts can include anything from jar and zip files to SQL or other configurations.

It is important to first understand the difference between traditional (otherwise known as full deployment) and partial deployment projects. The main difference for a partial deployment project is the ability to select a subset of artifact files for build and deploy operations. Consider a technology such as Oracle EBS, Salesforce, or even a database as a use case. With these examples, we have a large system of related or unrelated files such as in EBS which can consist of hundreds or thousands of customizations, each containing dozens of object types. Similarly with a database we could have several tables, views, triggers, or scripts to manage. In either case, FlexDeploy will allow us to dynamically pick and choose which files to build and deploy and save them as packages. It is unlikely that a user would want to deploy all the files in an EBS server or a database to the production environment.

There is much more content with regards to partial deployment projects but today we are diving into packages specifically.

In FlexDeploy, packages simply represent a list of files. During package creation, we can define a name, description, status, and the list of files. We can name packages to describe some feature in a release or whatever makes sense for an organization. One way we could organize our packages is by a change ticket number, which we will implement later after setting up a change management system.

FlexDeploy provides a few ways to find and add files to a package:

Package status is another useful functionality of which there are 3 options. 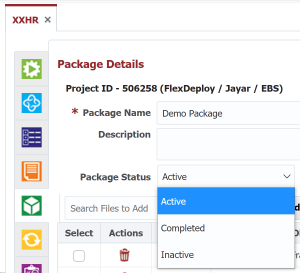 Once a package is created we have access to one other feature related to build and deployments on the packages screen.

The empty columns from “Latest Version” to “Prod” are dynamic columns that display an overview of package execution. We can see the most recent build version for each package under “Latest Version”. All the columns afterwards displayed the latest deployment to each environment listed. Keep in mind that the deployment columns match the environments associated to the deploy instance. And of course, all of these columns are empty because we have not run anything yet. 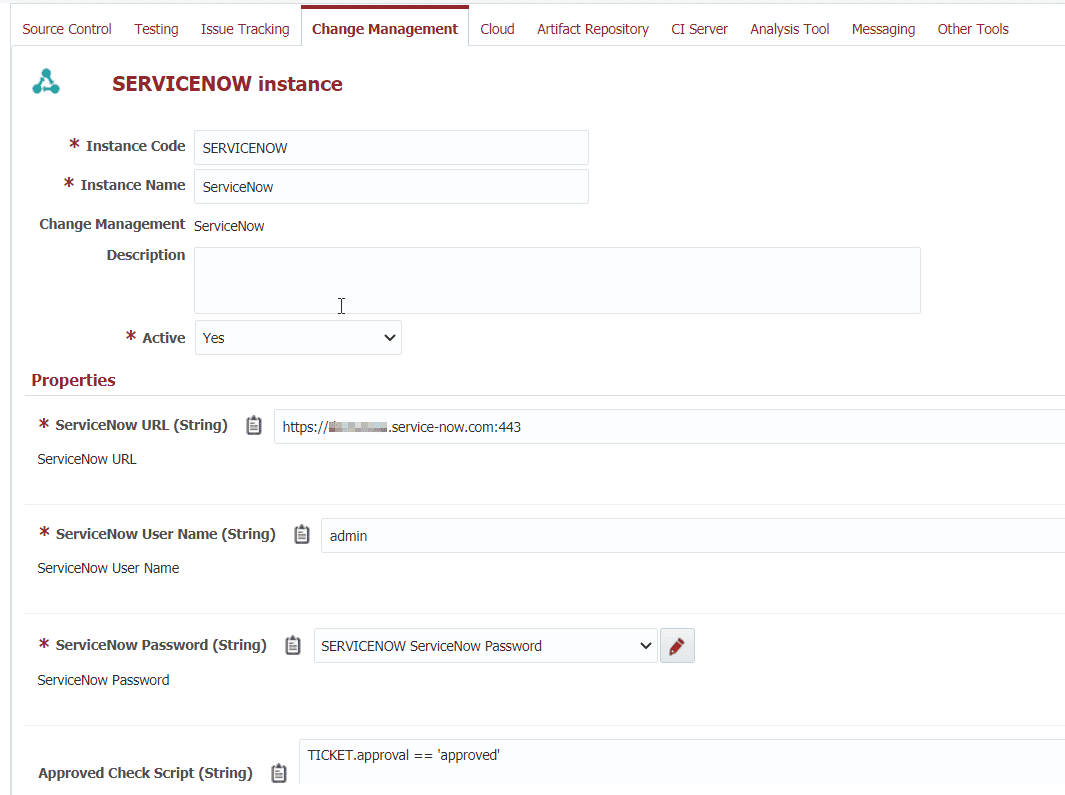 The CMS instance we created can now be referenced by a folder, application, or any number of projects. Keep in mind that configurations at the folder or application level will apply to all projects beneath it. For this example, we will set the CMS configuration directly on the project. 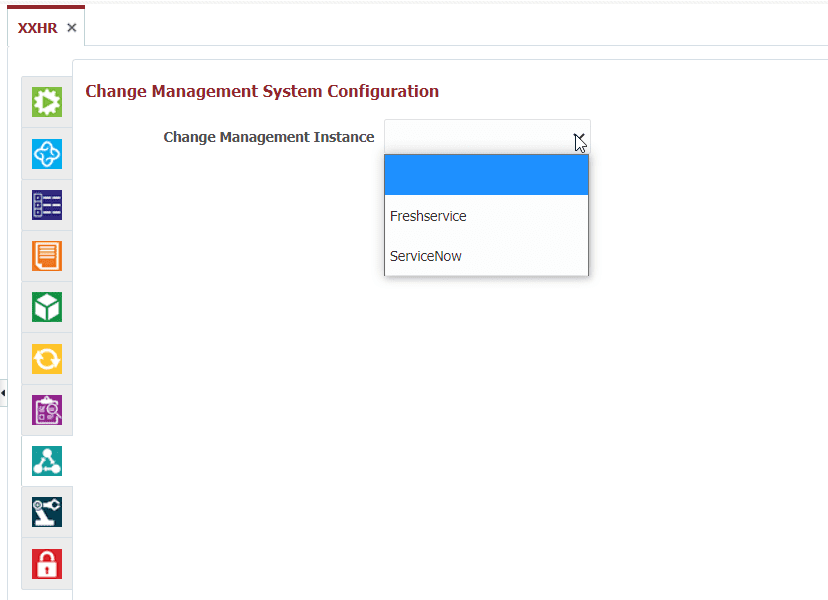 By default, CMS configuration inherits the global configurations defined in Administration -> Change Management Systems. Let’s override those settings and only check the “Require Change Ticket for Deployment”, which means whenever a user submits a deployment request they must specify a valid change number. The final step is to enforce an external approval for our project and we will create that one level above our project, which is the application level.

This approval is saying that whenever a project is deployed to the Production environment we need approval on our ServiceNow instance or we would need a user in the FD Administrators groups to override it in FlexDeploy. Now we are ready to submit a build and deployment with packages.

At this point say a couple change tickets were created in our ServiceNow instance. We will skip the creation of those tickets in ServiceNow because we have an existing blog article that talks about Lifecycle management with ServiceNow.

Now by definition everything contained inside our packages will relate to the change request and we don’t need to drill into the details of the files to understand what the package is for. At this point, we can run builds on our packages by selecting the package name on the build request form. 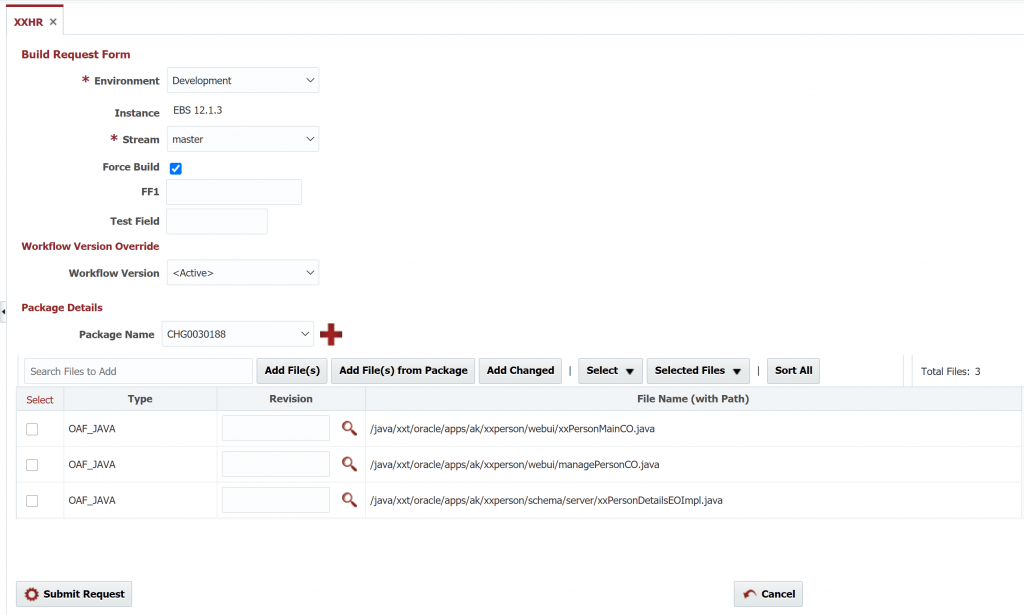 We can see Latest Version will populate on the Package screen once the build is completed.

From here we can click on a version number to get the project workflow details quickly. Let’s deploy both of these versions to the “Development” environment and then run a few more builds and deploy to some other environments except for Prod. Recall that we configured CMS on the project to require a change ticket number on deployments. 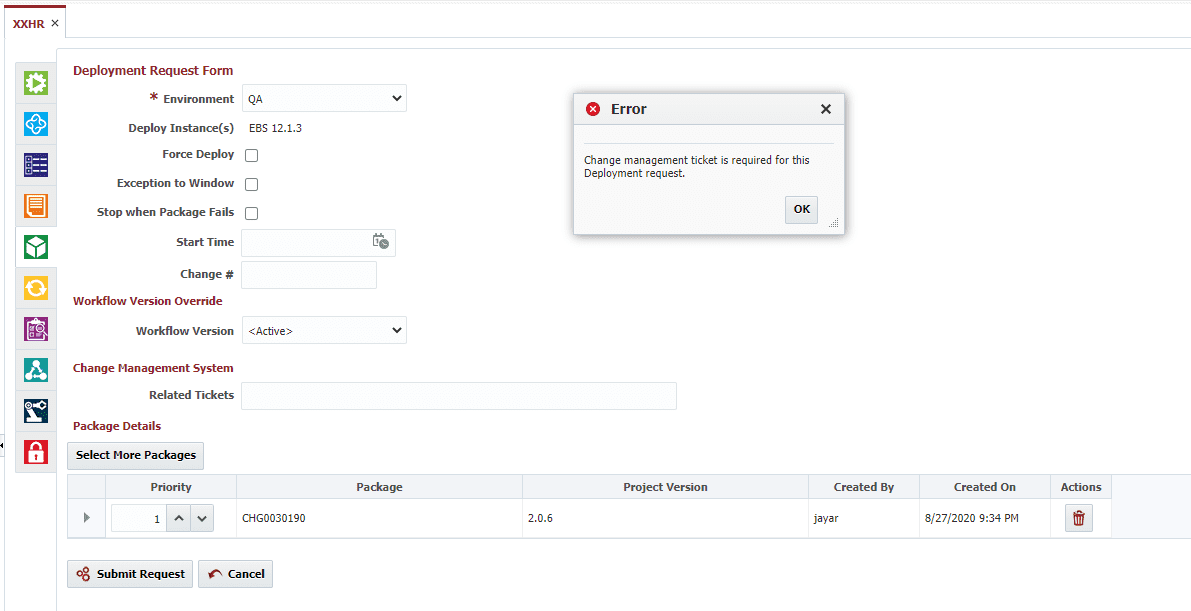 If we attempt to enter an invalid change ticket number or none at all then the deployment will fail with an appropriate error message.

Luckily, due to the convention we followed for the package name we can simply copy and paste the correct change ticket number from package details right below the “Related Tickets” field. In the example above the correct related ticket would be “CHG0030190”.

Now we can see that packages have been iterating new versions and those may be deployed to different environments at the same time. At this point, let say our packages are ready to deploy to Production environment. Recall that we set an external approval on the Prod environment. Let’s go ahead and send deployment requests to Prod for both packages to see the implications of our approval.

Deployment to Prod environment for CHG0030188 immediately went through because it was already approved in ServiceNow. On the other hand, CHG0030190 is waiting at a “Pending Approval” gate until it gets approved or rejected in ServiceNow. Or a member of the FD Administrator group can also approve or reject the pending approval.

Here is one final look at the package screen to see the state of our builds and deployments at the project level. On a last note, if desired, we could set the status of the CHG0030188 package to “Completed” because the changes for that feature have been pushed to Production. That means no more files can be added or removed from the package and build or deployment requests are not possible for that package.

In this blog article, we were able to show FlexDeploy as tool for organizing your development into change ticket based packages. Configuration of change management system was a one-time action. The package screen gives us insight into most relevant build and deployment execution information without having to search through the full workflow execution list. In general, packages offer great flexibility when organizing your artifact files.