Migration packages saves administrators time and reduces user errors, by eliminating the need to manually replicate setup details across multiple sites. Having said that, CPQ user will still need to follow the same manual, repetitive steps to deploy to all of your sites.

Why not just make changes in one environment and deploy to subsequent environments with a touch of a button?

In this blog, we will showcase the setup and process to automate deployments of CPQ migration packages with FlexDeploy.

FlexDeploy has an integration section where we can securely store external information and credentials. Data in integration accounts can be conveniently reused throughout FlexDeploy. We will need account(s) to connect to your CPQ cloud environment(s). Let’s assume this account is pointing to your DEV environment.

I’ve skipped over a few steps in the topology setup to keep the blog more focused. Feel free to checkout our Topology User guide to learn more in depth.

FlexDeploy utilizes workflows to determine what steps and operations will be used during build and deploy processing. To support the Oracle  CPQ build/deploy process we need two workflows:

The build workflow as stated before will contain the single packageExport operation.

Configuring the packageExport step is very simple. There are only 2 inputs:

In the same fashion, the deploy workflow is a single packageImport operation. 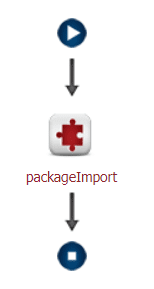 PackageImport has several inputs for customization. 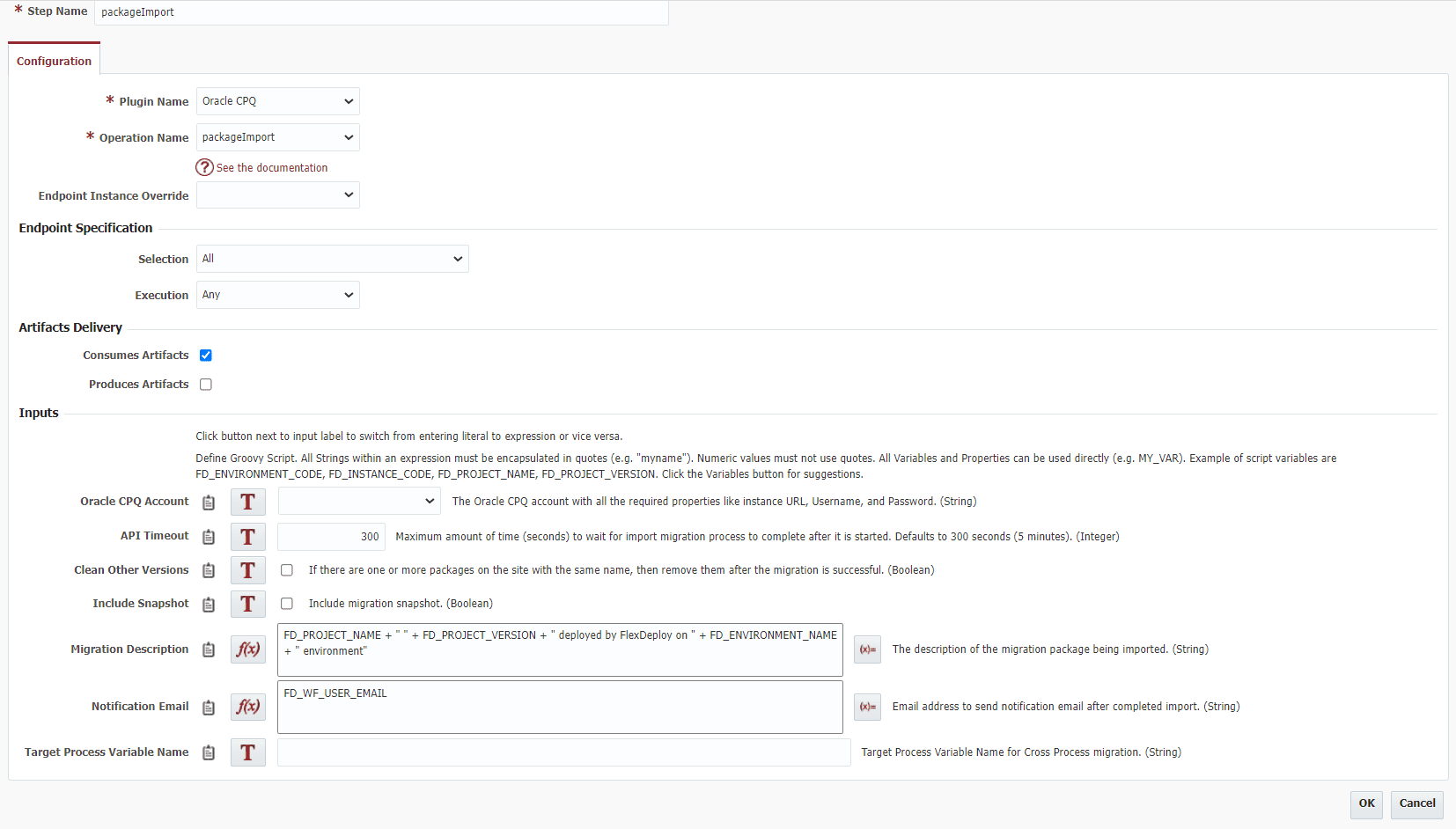 See the FlexDeploy Oracle CPQ Plugin Guide for more information on the packageExport and packageImport operations.

FlexDeploy projects tie together everything we created from the Topology and Workflows. For Oracle CPQ deployments we will need to create a specific project type to make the most use of the plugin and automation. Create a partial deployment project of type Oracle CPQ.

The configuration portion of the project is used to define properties unique to the project including the build and deploy workflow, instances, and source control.

In this case, we are pointing to the CPQ build and deploy workflows and Oracle Common Features instance shown in previous setup. Notice SCM Type is set to None. The FlexDeploy Oracle CPQ Plugin only supports environment-to-environment migrations and does not pull from SCM.

Next we will go to the project files screen and click Populate from Oracle CPQ. After some time you should see the project file refresh with all packages existing on the selected environment.

We are ready to start running CPQ migrations from FlexDeploy!

FlexDeploy allows you to executes build and deploy requests in three ways: 1) Build with all files, 2) build with a package, and 3) build with an unnamed package.

Let’s run a build request with an unnamed package for simplicity. All that needs to be done is selecting the build environment and add the files you’re interested in deploying. In this case, we added both of our test files. 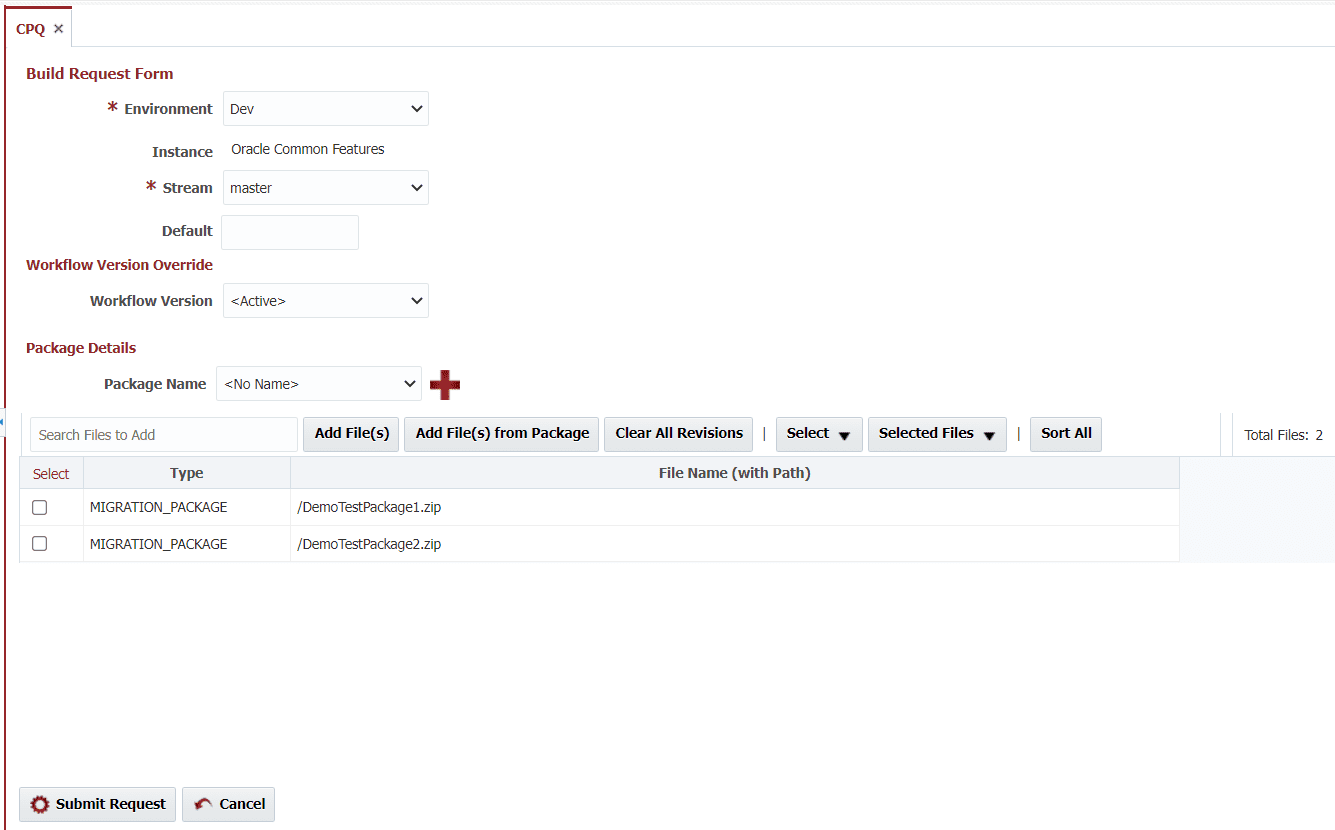 After submitting the build, each migration package file will be sequentially exported into a single zip artifact and saved on the FlexDeploy server. Essentially, this is the same process as logging into all of your Oracle CPQ environments and downloading every migration package you’re interested in.

Once the build is complete, let’s deploy our unnamed package to the Test Oracle CPQ environment.

At any time after the build or deployment request is submitted you can view real-time logs of the execution to see progression and to debug if any failures occur.

Once our deployment is completed, we should receive an email of completed import for each file based on the notification email input defined in our deploy workflow. Below is an example of that email notification.

Now we know DemoPackage2 was successfully deployed, but let’s also confirm on the target environment as well. Navigating to the migration center on our Test Oracle CPQ Environment we can see that DemoTestPackage1 and DemoTestPackage2 are present.

One more place to confirm is also in the migration logs. The first two entries in the table below show successful import, and the description is set based on the Migration Description field in our deploy workflow. You can further navigate into these logs to get more details as well.

Learn more about the ins and outs of Building and Deploying projects here.

Oracle CPQ is a great application that enables organizations to accurately generate quotes and proposals, and capture orders for various products and services. Some aspects of CPQ — such as migration packages — could be better automated. I hope now you can see where FlexDeploy’s Oracle CPQ Plugin solves that issue and reduces manual tasks. Using FlexDeploy’s release and pipeline features, the movement of CPQ migration packages can easily be incorporated into a release and deployment to any number of environments automatically.

For more information on release and pipeline features in FlexDeploy: