The first operations added to the plugin were buildDeploymentGroup and deployDeploymentGroup. The build captures the name of the deployment group that you wish to migrate, and the deploy operation deploys it to the next environment. The preferred usage would be to have a FlexDeploy project for each deployment group that you wish to migrate. This will allow you to use them in a release, keep a clear audit trail, and have good visibility into the state of each environment.

The workflows for the Informatica plugin are as simple as can be. The build and deploy both require just one step, and no configuration is required for the typical use case. 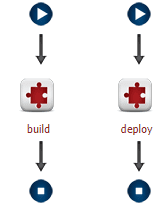 We will continue to add support for other operations in the future as demand directs. Don’t hesitate to reach out if you have Informatica pain points that FlexDeploy could address, or want to check out the new plugin.