Oracle’s Infrastructure as a Service (IaaS) public cloud provides raw compute and storage capabilities that can be used for almost any workload.  This blog series will outline the process used to migrate existing workload from our on-premises data center to instances running on Oracle IaaS public cloud compute and storage services.  The first part of this series covered the process to manually create the components needed to start an instance using Oracle provided Enterprise Linux image on the Oracle public cloud.  The second part covered the process to secure the Oracle IaaS instances.  This part of the series will describe the use of orchestrations to provision storage and instances.

The basic process to use orchestrations is as follows:

An IP reservation is used to reserve a public IP address that can be used to access the instances being provisioned.  In the main list of tabs, select Network and then select IP Reservations from the options on the left hand side.  Click on the Create IP Reservation button:

Enter the name of the IP Reservation and leave For Instance set to None.  For clarity, it is recommended that the name reference the name of the host being provisioned.  Click on Create:

NOTE*** IP Reservations can also be done using a third orchestration if desired.

The storage orchestration file is used to provision the storage that will be used the instance.  This is a JSON file and the various options that can be added in the JSON are documented in Oracle Cloud Documentation.  Recommendations for building the orchestration:

The above orchestration file will provision two storage volumes, a 6GB volume containing the bootable image of an OEL 6.4 image and a 50GB.

The instance orchestration is used to associate the instance to IP reservation, ssh keys, security lists, and the storage to provide a running Linux instance.

The orchestration above accomplishes the following:

Refer to the Oracle Cloud documentation for the full details on all of the options available in the JSON.

To make the orchestration files accessible to the IaaS public cloud, we now need to upload these files. 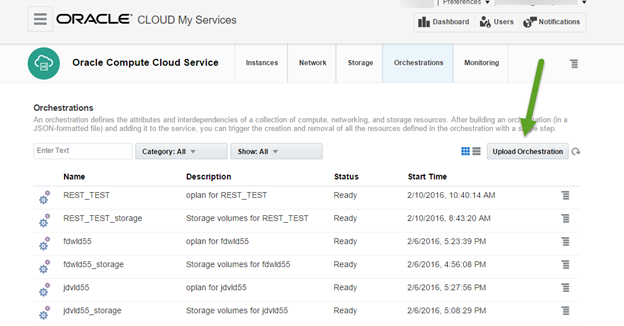 Use the Choose File option and pick one of the orchestration files and click on Upload:

If the Orchestration file is valid, the following messages will appear: 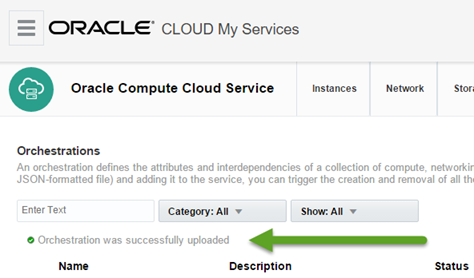 If there are errors in your Orchestration file, an error message will appear instead with a link to download a file containing the error details will be shown.

Repeat this process for your other orchestration file.

From the Orchestration tab, select the drop to the right of the storage orchestration and click on Start:

When the status turns to Ready, you can proceed with starting the instance orchestration.

The steps listed above are the basic operations needed to provision storage and instances using orchestrations.  The use of orchestrations is the recommended approach for managing instances and storage on the IaaS public cloud because of the reasons outlined earlier in this blog.  In the next portion of this blog series, we will explore how to leverage FlexDeploy in the Oracle cloud.

I have over 25 years of broad and deep experience using relational databases, with the last 10 years focused primarily on Oracle. I have held DBA, architecture, and management roles over my career. At Flexagon, I lead the FlexDeploy development for database and cloud related strategies.