For Oracle Cloud Application users, fast formulas are a neat feature that serve as a sort of shortcut. Fast formulas are generic expressions of calculations or comparisons you need done regularly in your Oracle application. They typically involve basic mathematical functions and are easy to define using English words versus programming jargon. Formulas take input from a window, a database, or a process, such as a payroll run and they return values or messages.

Oracle fast formula use cases could include performing validations, calculations, and/or to specify rules. For example, in Payroll you may use a formula to calculate total compensation values or specify rules for skipping a pay element during payroll processing. An example in the Compensation and Benefits Management area could be specifying the rules for paid time off accrual plans, such as how much time is accrued and over what period or when new hires are eligible to begin accruing time. It is very customizable.

Oracle’s Functional Setup Manager (FSM) UI provides export/import capabilities to move fast formulas and other configurations from one environment to another, however it requires a user to manually invoke the move. While not a challenging task, it can be time consuming to manually submit the export process, monitor, download the artifact file, and do the reverse to import into a subsequent environment. Additionally, some setup tasks can be migrated partially allowing users to move only required fast formulas. While it’s helpful to move only needed fast formals, this adds more manual work as a user will need to perform migrations by carefully selecting which fast formals to migrate.

With FlexDeploy’s Oracle SaaS FSM Plugin, users have the ability to automate the export and import of setup tasks as a whole or as individual formulas within the fast formula setup task. This can be useful to manage deployments of fast formulas where only a subset of the formulas need deployment. It also removes manual intervention and brings this migration into the Enterprise DevOps platform with support for governance and audit.

Setting up FlexDeploy for Fast Formula

To start automating deployments with FlexDeploy, we will need the following:

Details on creating all of these components have already been covered in a similar blog.

A few things to keep in mind for working with the FlexDeploy Oracle SaaS FSM Plugin.

FlexDeploy will internally store attributes for each file you are trying to deploy whether you want to deploy the generic setup task or specifically a fast formula setup task.

The main difference between these two object types is that Setup Task deploys all setup data related to a given setup task, while Fast Formula deploys setup data for a specific formula for the fast formulas setup task. See the corresponding object type pages for more details.

At this point, we should have the main setup in FlexDeploy (Workflows, Topology, and a Project). All we need now is a fast formula we want to deploy.

Navigating to our Oracle application under the Setup and Maintenance area we can search for the Fast Formulas setup task.

After clicking on the Fast Formulas link, you can see a table of all the formulas available to you. We will use the formula with the base name of PERFORMANCE_FF_EXAMPLE_USING_PARTICIPANT_RATINGS_WITH_MANAGERS_RATINGS for our demo deployment. Keep in mind that only editable formulas can be exported and imported.

Now we can go to FlexDeploy and add this formula as a fast formula object. It is as simple as clicking Create, adding the path of the file, clicking Evaluate, and finally clicking OK. The path of the file is following our recommended structure when sourcing from the CLOUD which is “/SetupTasks/<TASK CODE>/<BASE_FORMULA_NAME>.zip”.

Keep in mind fast formulas files can also be sourced from GIT. For that functionality, you would need to push the CSV file package to SCM such as GitHub or GitLab and then click the Populate from GIT button to add files automatically. Populating from Git has a few other points to be aware of so I would recommend taking a look at the object type documentation again for that option.

We will build Performance_FF_Example_Using_Participant_Ratings_With_Managers_Rating file on our Dev Oracle environment.

Here we can see Build version 1.0.26 is running. Once that completes we will deploy the fast formula to our Test Oracle environment.

Now we can deploy to Test. 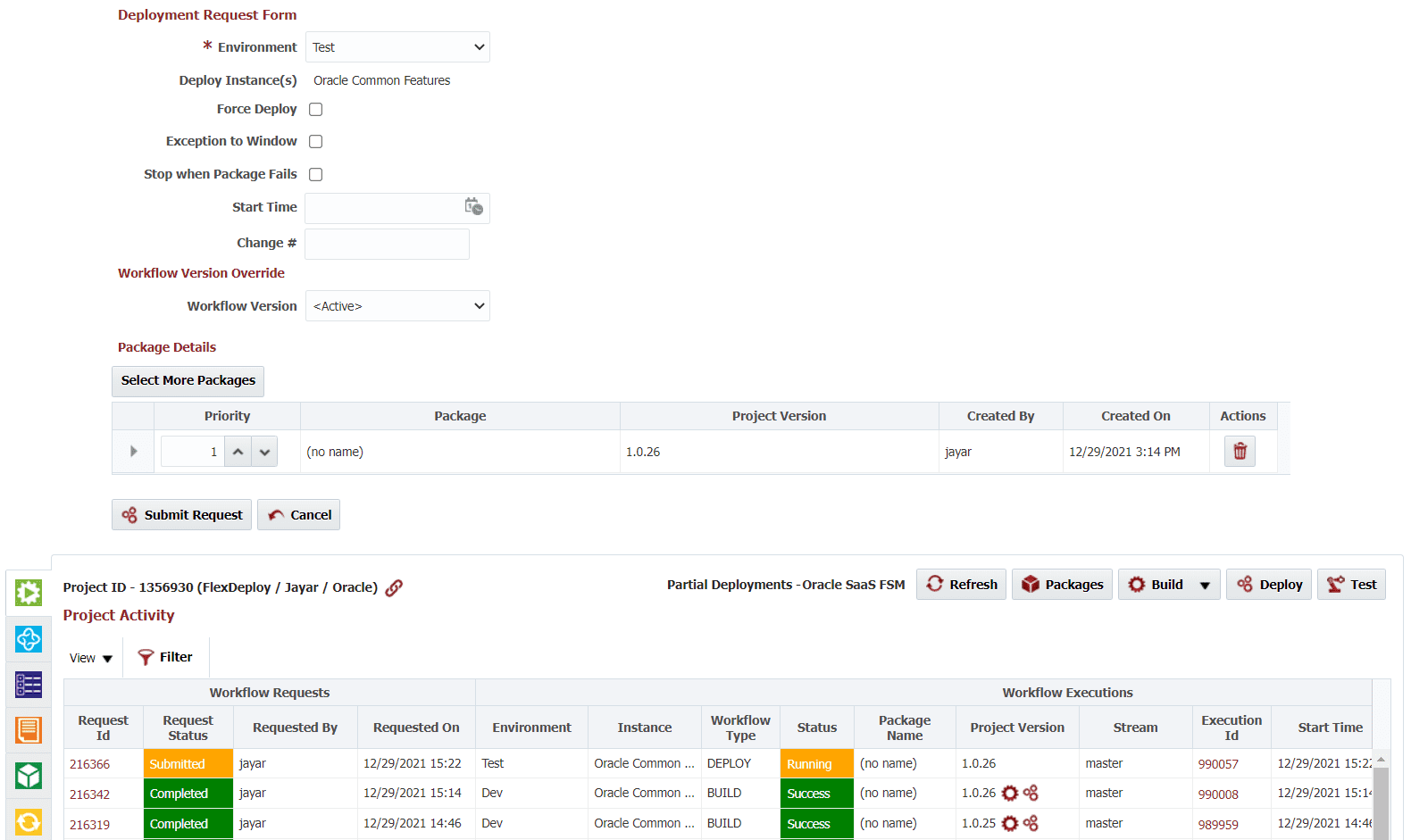 We can look at completed exports or imports on the Oracle application as well. Here we can see the latest execution we just ran on December 29th was successfully imported by ROBERT.JACKMAN. The CSV File package itself can be downloaded from FlexDeploy artifacts or Oracle FSM UI to confirm the individual formula is imported.

In this post you have seen how we can automate and manage Oracle Fusion application fast formula deployments using FlexDeploy. After an initial setup and file population, FlexDeploy can easily be used to monitor and deploy any number of changes to any number of Oracle applications such as ERP, HCM, and SCM. Keep track of your setup task deployments either on the whole file package level or, in the case of fast formulas, on a formula level.

See the FlexDeploy Oracle SaaS Plugin Guide for the most up to date information.