Recently I started blog series regarding FlexDeploy support of container native technologies. This is the second article in the series on what makes FlexDeploy a perfect fit for these modern trends in the industry:

So, it’s time to follow up. In this post I am going to show how FlexDeploy can enrich a very cool new product from Redwood Shores, CA.

Oracle guys are working nowadays on Container Native Application Development Platform. This is a set of cloud services to build, deploy, and operate container-native microservices and serverless applications. From the CI/CD perspective it provides the following services:

These components can be used all together as it is shown on the diagram or they can be used separately in combination with other products or Docker registries in order to build you own development platform. This is what I am going to do in this post.

I can live with Wercker as a building approach and I am totally fine with Oracle Container Registry, but I would like to enrich the deployment part. I want to leverage the full power of FlexDeploy Pipelines providing approval gates, test automation, scheduled events, manual steps and many other features that automate a complicated deployment process across environments. Having said that, we are going to implement the following scenario:

We will take a simple AngularJS application storing its source code in GitHub. Wercker is going to fetch the code, build a Docker image and push it to the Oracle Container Registry. Having done that Wercker is going to invoke FlexDeploy via REST API to create a snapshot referring to the new Docker image and deploy it with a pipeline across environments represented by K8s clusters hosted in different clouds. Actually, we are going to use the same FlexDeploy Pipeline as in the previous post.

Let’s have a look at the Wercker configuration. I have created an application and defined a workflow for it: 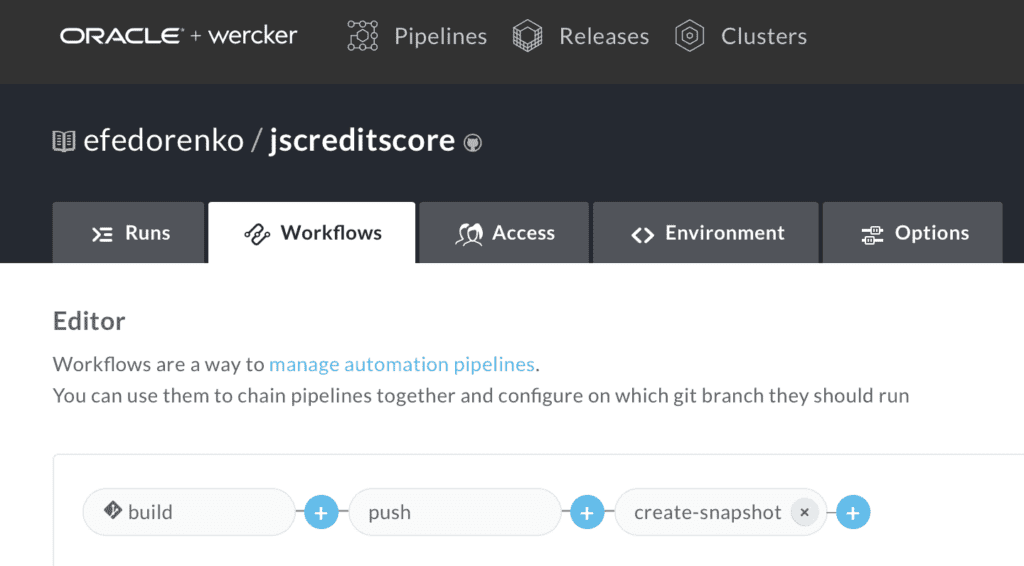 So, the workflow builds an image, pushes it to the registry and creates a snapshot with FlexDeploy. Once a snapshot is created, FlexDeploy automatically propagates it across environments. In Wercker terminology each part of this workflow is called a “pipeline” (that’s why Oracle Container Pipelines). Don’t mix it up with FlexDeploy pipelines. These “pipelines” are referring to sections in a yaml file which contains instructions on what actually should be done:

Once the source code is changed in GitHub, Wercker executes its workflow and eventually invokes FlexDeploy REST API to create a snapshot.

FlexDeploy will take care of the rest from here. I have created a Release definition in FlexDeploy referring to a pipeline which is going to be used to deploy Docker image across environments.

The release contains a single project jscreditscore. The purpose of this project is to build a K8s deployment profile (*.yaml file) referring to a Docker image in Oracle Container Registry. This yaml file, which is actually a project’s build artifact, is going to be used by a deployment workflow to deploy the Docker image to the target K8s environment. The jscreditscore project uses a simple build workflow to create the yaml file: 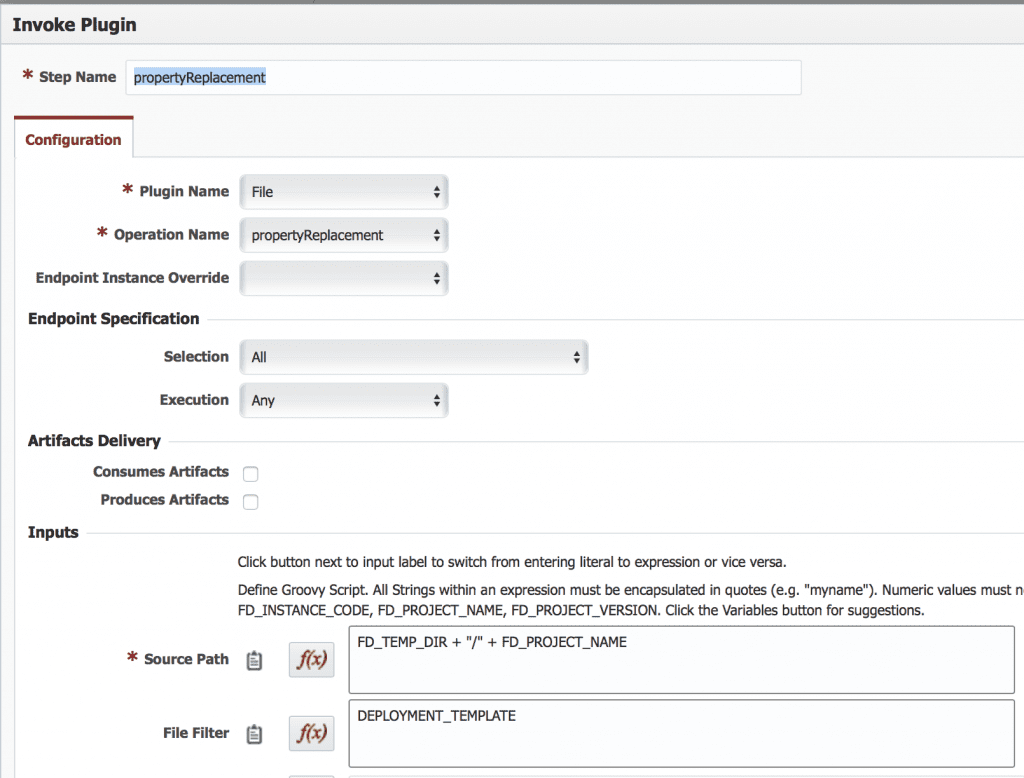 The name of the yaml template file is provided by a project-scoped workflow property DEPLOYMENT_TEMPLATE. This template contains a reference to a Docker image constructed with placeholders:

After processing the file by the propertyReplacement step it will contain the exact reference to the image. E.g. :

The final step of the build workflow saveArtifact does what it is named for, it saves that yaml file as a build artifact, which can be consumed by the deploy workflow. So, when Wercker invokes FlexDeploy REST API it actually says “build jscreditscore project, create a snapshot for CreditScore Container Native release containing the build artifact (yaml file) and run a pipeline associated with the release”. The pipeline uses totally same deploy workflow as in the previous post. The beauty of it is that it just needs a yaml file and a K8s context (environment-instance property) where to apply this yaml file.

Having done that we have built a container native CI/CD pipeline on top of two solutions demonstrating how they can work together and enrich each other with their strong features.