Increase the effectiveness, efficiency, and coverage of your software testing.

Automation does what manual testing cannot, and at less cost

Achieving speed within the software delivery process requires end-to-end automation. Although there is a place for manual tests, organizations need to increase test quality and effectiveness across the software delivery lifecycle, including unit and other functional tests, quality tests, and performance and load testing. There are many test processes and tools in the market, both open-source and commercial. DevOps, Application Release Automation, and Continuous Delivery process and tooling need to integrate with many test tools, making it easy to plan and execute tests automatically and as part of an integrated delivery process. Not only should users be able to trigger and execute test automatically, but the results of the tests should also be actionable and there needs to be visibility and insight which can be used by developers, testers, release managers, and others roles within the end-to-end delivery processes.

The FlexDeploy platform includes an integrated test automation framework and plugins to the most popular open source and commercial test tools. The test automation framework allows the users easy configuration of test strategies across environments, including for unit, functional, performance, and other quality tests. Actions can be taken immediately upon failures, increasing the speed of problem resolution. Visibility to test results via dashboards and reports leads to informed short and long-term decision making and continuous improvements.

Learn how our test automation framework can make a difference for you. 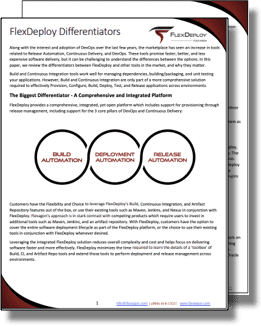 Learn how FlexDeploy can help you increase the effectiveness of your testing.