Docker and Kubernetes allow development teams to move faster, deploy more efficiently, and operate at an ever-growing scale. FlexDeploy 6.0 container support has been revitalized to enhance teams’ ability to leverage these tools to increase operational efficiencies, improve developer productivity, and be more consistent with other plugins. Here’s what you will find:

Let’s take a look at some examples of these new features in more detail.

Let’s start by looking at the properties tab on an already configured Docker project.

We can see the newly added Image Name and Image Tag properties. Previously you would have configured these on the Docker tab. As you can see it is now simpler and more in line with other plugins. Additionally several new variables have been made available for use in project properties to ease this transition. The following variables were added to properties:

These new variables allow for many scenarios, including having different tags for every branch. For example something like this:

Prior to FlexDeploy 6.0, many of the Docker plugin operations had different inputs or project properties for the same thing. With the new image name and image tag properties, it is now cleaner when using different operations across the same project. For instance you could build an image and then push it to different repositories based on the environment. All without needing to configure anything except adding the dockerPush operation to the workflow, and configuring the correct repository in each environment.

Another addition is that whenever a Docker image is built or pushed, it will show up on the artifacts tab: 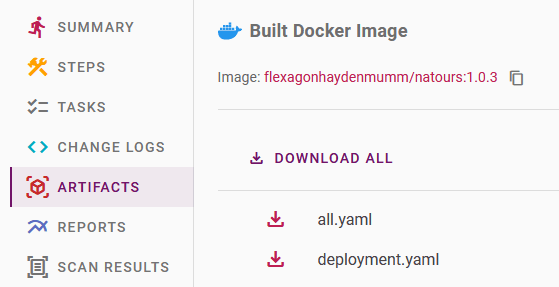 This makes finding your images easier, and provides the ability to easily copy the image from this screen. It’s also very clear which image and tag were built.

Passing Outputs From Build to Deploy

The last new feature I would like to talk about is the ability to pass values from a build workflow into the deployment. The following outputs are automatically captured from the dockerBuild operation:

Now that these are being captured we can use them anywhere in the deploy workflow that you would normally use a variable. For instance you could use them in a Helm values file like this:

I have created a workflow here with a variable set to output called TEST.

Next, let’s use this in a deploy workflow. I’m going to display the variable value using the Unix shell plugin. Since we have the code snippet input set to expression, we can use the variable directly:

And we can see the result:

This feature is very powerful, and not just for containers. I’m excited to see what our customers can do with it.

As you can see the Container experience in FlexDeploy will be greatly improved with the release of FlexDeploy 6.0. It is much more streamlined to setup and maintain a Container project. FlexDeploy 6.0 is transforming developer productivity, which just might transform your business. Let us know what you think.

If you’d like more information about containers check out the links below: