The popularity of microservices, or microservices architecture, is growing rapidly. The global cloud microservices market is forecasted to grow to $1.8 billion over the next five years – a 22.4 percent growth rate between 2018 and 2023.¹

The core principle behind microservices is segmenting large applications into small, independent functions. Each function is powered by a small, hyper-focused team that is responsible for their service and ensuring they select the appropriate technologies, processes, and tools for that service. Being responsible for a dedicated function ensures that teams know exactly what they’re focused on and their deliverable timeline. That single focus helps teams zero in and increase productivity.

Each microservice runs according to its own process and usually manages its own database. That releases IT teams from coordinating with peers on the progress of other applications or waiting to deploy code until an entire application or update is ready. Each microservice team can set and manage their deployment schedule to complete projects faster and increase the overall speed of application deployments. 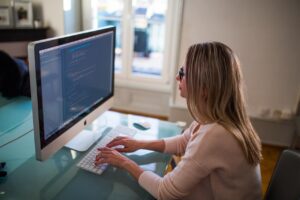 When microservices architecture isolates functions, it also isolates errors. A problem in one microservice won’t shut down the entire application, it will be contained in that one area while other microservices continue to function. That not only improves uptime but makes it easier to pinpoint the source of the problem and resolve it.

5. Compatible with CI/CD and Agile

Microservices architecture is compatible with the most effective process in the software industry, including CI, CD, agile and container methodologies. Teams can choose the processes that work best for their needs, integrating microservices into their development methods and using whatever tools they prefer, such as Docker and Kubernetes for containers or FlexDeploy for DevOps.

By working in focused modules, microservices architecture improves the overall quality of the application system. Teams are focused on small, well-defined functionality, enabling them to create high-quality pieces of code. Not only does this positively impact the reliability of the code, it makes it easier to manage issues within the code base while enabling scalability and reusability with third-party services.

Independent functions can easily be extracted from applications for reuse and repurposing in other applications, improving scalability. Individual development teams can also implement and deploy their code without wrestling the schedules of a larger IT team or department. That makes it easier for large organizations to use microservices architecture to cut down on internal politics and other issues that may delay deployments.

Microservices architecture’s biggest strength is creating small, focused teams that can develop independent functions faster, at a higher quality level. It works with major development methodologies like continuous integration and delivery, as well as DevOps to improve processes for more effective IT teams across businesses.

Teams interested in microservices may also want to look into other complementary methods such as containers. If you’re interested in how microservices and containers can work together in cloud technology, stop by Flexagon’s session at Oracle Open World: Develop, Build, Deliver and Run Microservices with Containers in the Cloud. We’ll go into more detail on best practice for microservices, container technology such as Docker and Kubernetes, and CI/CD pipelines to help you create efficient, effective processes.