The speed of software development and release today would have been almost unimaginable ten years ago. In 2018, over half of developers wanted to deploy builds more frequently than every week, with 16 percent saying they’d prefer to release builds every hour.¹

As deployment timelines speed up across the market, companies need to reduce their time to deployment or risk losing their competitive advantage. That’s especially important for companies developing and customizing robust and varied toolsets, like Oracle. Leveraging DevOps methodologies and tools is one strategy IT executives are using to keep pace. 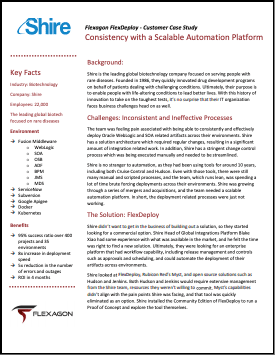 Like many companies on the cutting edge of their field, Shire faced problems being able to consistently and effectively deploy Oracle WebLogic and SOA related artifacts across their environments. Shire’s manual and scripted processes caused their team to spend a lot of time brute forcing deployments across environments. As they grew, Shire needed to improve processes and team use with a new, scalable automation platform.

Shire evaluated multiple tools, including Jenkins and Rubicon Red’s Myst, each of which required either extensive management from their team or didn’t align with their pain points. At the end of the process, Shire implemented FlexDeploy due to its performance and support for Oracle Fusion Middleware.

Shire immediately began leveraging FlexDeploy’s workflow features to configure reusable workflows that lay out the delivery processes to ensure code, configurations, and other changes are being built, tested, deployed, and released properly, linking together complex pipelines and automating tasks across the lifecycle. They then used automation to drastically reduce the amount of time spent executing manual steps and building, testing, and maintaining scripts.

Tracking and visibility tools eliminated the time spent handling the fall-out from failed deployments such as production outages and the frantic search to identify and fix what caused the failure. Not only can the team see what exactly was deployed, but with rollback capabilities they can go back to a prior working version.

How Workflows, Automation and Visibility Changed the IT Team’s Results

By leveraging FlexDeploy’s tools to optimize their processes, Shire increased their deployment speed by 8x and reduced errors by 5x. They’ve had a 95 percent success ratio over 400 projects and 35 environments, achieving ROI in just four months.

With fewer problems and faster time to market, Shire’s IT team can now focus more on achieving business goals so the company can continue to grow and innovate in the biotechnology field.

For more information on Shire’s processes, challenges, and results, download the case study. 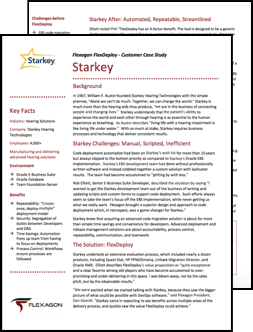 Starkey Hearing Technologies produces hearing aids under with the simple premise, “Alone we can’t do much. Together, we can change the world.” Their goal is to connect people and change lives by helping patients regain an essential sense.

Moving Past EBS Implementation to Enable IT Innovation

Code deployment automation had been on Starkey’s wish list for years but always slipped to the bottom priority as compared to their Oracle EBS implementation. As a result, their EBS development team did without professionally written software and instead cobbled together a custom solution with lackluster results. The team became accustomed to “getting by with less,” said Rob Elliott, Senior E-Business Suite Developer at Starkey.

To enable their team to focus on high-value tasks, they began to prioritize a code deployment solution.

Time Savings (ROI): Workflows, automation, and pipeline management reduced the time and energy Starkey spent on planning and executing deployments so they could focus on innovative solutions to business needs.

Process Control: Starkey leveraged FlexDeploy’s workflows to ensure processes were followed and required approvals were given before changes are made.

Starkey now uses FlexDeploy as a code deployment and DevOps tool to optimize operations and free up their team for high-value business innovations. After implementation, they saw a 5x decrease in the time to execute deployments and a 3x reduction in deployment-related errors.

“The team was elated with the results; the developers felt that they were being provided with a strong tool that made their jobs easier without a bunch of wrangling, complex training, or complex software to install on every PC. In short, it just works,” said Elliott.

For more information on Starkey’s processes, challenges, and results, download the case study. 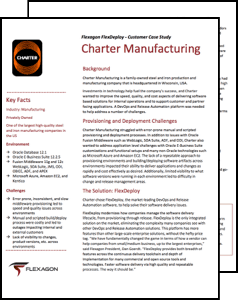 Charter Manufacturing is a family-owned steel and iron production and manufacturing company that uses technology investments to help fuel the company’s success.

Charter wanted to improve the speed, quality, and cost aspects of delivering software-based solutions for internal operations and to support customer and partner facing applications, but they struggled with error-prone manual and scripted provisioning and other processes. The lack of a repeatable approach to provisioning environments and building/deploying software artifacts across environments impacted their ability to deliver applications and changes as rapidly and cost effectively as desired.

In addition, they faced issues with Oracle Fusion Middleware such as WebLogic, SOA Suite, ADF, and ODI, and wanted to address application-level challenges with Oracle E-Business Suite customizations.

A Lack of Oracle Support in Open Source and Commercial Tools

To solve their problems, Charter evaluated open source tools such as Jenkins as well as solutions from vendors such as CloudBees, Redgate, and Go Continuous Delivery. But few options provided the Oracle product support they needed.

“We researched a lot of deployment related software, most of it fragmented with little to no support for Oracle” said Charter Manufacturing’s Middleware Engineer, Matt Gerkhardt.

Implementing a Centralized Deployment and Orchestration Engine with Oracle Support

Charter chose FlexDeploy due to its deep support for Oracle and its proven success. “FlexDeploy had us up and running in a matter of days and had all of the tools necessary to integrate into our broad Oracle technology footprint. It is more than a deployment engine, it’s an orchestration engine that provides consistent project execution,” said Gerkhardt.

FlexDeploy offered a centralized and simplified solution for Charter’s toolchain, while also enabling them to build once, which reduced missed objects and increased overall quality. Charter also leverages FlexDeploy’s full automation of WebLogic and SOA infrastructure provisioning to improve their processes.

All their improvements resulted in ROI within just six months. “FlexDeploy has provided us with a huge leap forward in terms of code management, environment management, and operational infrastructure automation,” said Gerkhardt.

For more information on Charter’s processes, challenges, and results, download the case study.

Shire, Starkey Hearing Technologies, and Charter Manufacturing span multiple industries and leverage a variety of Oracle technology, but their challenges were the same. They struggled with time-consuming, manual processes, and finding a software deployment tool that supported Oracle.

A DevOps platform that spans multiple stages of the software delivery lifecycle can streamline processes and deal with those common challenges through automation, workflows, security, and other core features.

The key is to find an option that supports the products and services you’re already using. Oracle users need support for EBS, Fusion Middleware, Oracle Database, and other commercial and open-source tools, or their solution won’t be effective. Find the right solution for your processes, tools, and pipeline, however, and you can drastically decrease your time to deployment and leverage that to improve your market position.